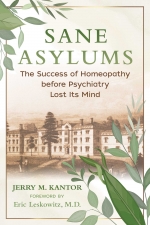 In the late 1800s and early 1900s, homeopathy was popular across all classes of society. In the United States, there were more than 100 homeopathic hospitals, more than 1,000 homeopathic pharmacies, and 22 homeopathic medical schools. In particular, homeopathic psychiatry  from the 1870s to the 1930s, with thousands of documented successful outcomes in treating mental illness.

Revealing the astonishing but suppressed history of homeopathic psychiatry, Jerry M. Kantor examines the success of homeopathic psychiatric asylums in America from the post–Civil War era until 1920, including how the madness of Mary Todd Lincoln was effectively treated with homeopathy at a “sane” asylum in Illinois. He focuses in particular on New York’s Middletown State Homeopathic Hospital, where superintendent Selden Talcott oversaw a compassionate and holistic treatment regime that married Thomas Kirkbride’s moral treatment principles to homeopathy. Kantor reveals how homeopathy was pushed aside by pharmaceuticals, which often caused more harm than good, as well as how the current critical attitude toward homeopathy has distorted the historical record.

Offering a vision of mental health care for the future predicated on a model that flourished for half a century, Kantor shows how we can improve the care and treatment of the mentally ill and stop the exponential growth of terminal mental disorder diagnoses that are rampant today.

This talk is sponsored by the Needham Free Public Library.  Books will be available for purchase and autographing as the conclusion of the talk.

Registration is required for this event. To register, please provide the following information:

Email reminders are sent 48 hours before the event takes place.

If this event is canceled, we will use the contact information you enter here to get in touch with you.