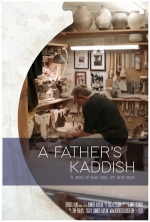 Jen Kaplan, a local filmmaker recently finished a new film entitled “A Father’s Kaddish.” The film tells the poignant story of how one father uses art to grieve the loss of his son.

In 2005, Jared Branfman died of brain cancer at the age of 23. A week after his death, his father, Steve Branfman, a potter and teacher, went into his studio, took some clay and made a chawan, a Japanese style tea bowl. Each day for one year, he made one chawan - they were the only pots he made. Steve’s daily chawan made at his wheel was his own personal Kaddish (the traditional Jewish prayer of mourning).

For almost a decade, these 365 bowls sat unfinished on shelves in his studio. After nine years of mourning, Steve glazed and fired the chawans, bringing them to life with color and sheen. According to Kaplan, “It was like Steve was finally able to start a new chapter in his grief process. As a filmmaker, I felt humbled to capture his heart wrenching process.”Steven Branfman who lives in Newton, is the founder of a studio in Needham (Gorse Mills Studios) and teaches at Thayer Academy in Braintree.

You will be sent a link to the documentary two days before the event to view ahead of time. The library will be hosting a moderated discussion about the film on April 20th.  Sponsored by the Library Foundation of Needham, this will be a Zoom presentation.

Registration for this event has now closed.